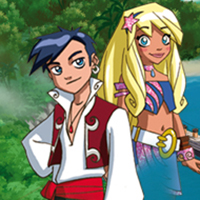 In the magical setting of an enchanted island, what of all things but the infamous ship Titanic happens to wind up in a nearby cove? And who do we find on the premises, but our friends from the «Legend of Titanic» saga?! The gang’s all here: Elizabeth, Don Juan, the mice (Smile and Top Connors), a clever dog called Fox, Chantilly (Fox’s sweetheart) — and then there’s Tentacles, the 7-year-old child octopus who had previously saved the ship’s crew. Unfortunately, the baddies Van der Tilt and his assistant are here as well! Fantasy Island is an animation that takes us on a thrilling ride from the kingdom of Atlantis all the way to an island unlike any other….